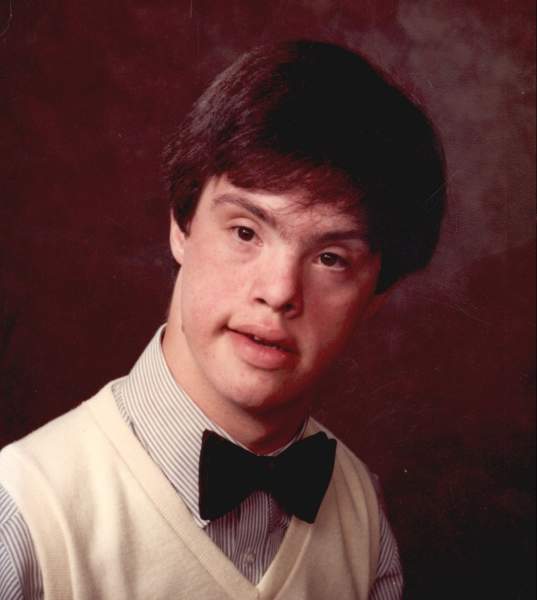 Austin Quinn Coltrane of Farr West, UT. passed away peacefully on May 2, 2022, at Ogden Regional Hospital surrounded by his family. He was 56 years young. Quinn was born on August 28, 1965, to Mary Lou Vance and the late Joe Damacio Gallegos at Thomas Dee Memorial Hospital in Ogden, UT.

Despite being born with Down Syndrome, Quinn exceeded all expectations, defied the odds, and lived a full, healthy, active life. Quinn was a Heaven-sent special delivery straight from God to a mother who devoted her entire life to giving Quinn the very best of everything here on earth.

In 1977, Mary met Willie Coltrane who jumped into Quinn’s life with both feet and excitingly adopted Quinn. Willie would become the man who would love Quinn the way his mother did and who Quinn would know and proudly call Dad for the rest of his life.

In 1982, Quinn became a big brother to his baby sister, Lacey and then 15 months later to his baby brother, Vance. Having these two new best friends who helped and enjoyed caring for him, was his personal bodyguards, and biggest cheerleaders made him very happy and proud, and he showed it by the way he gladly toted them around when they were young and gave into their many shenanigans. He was so glad to become an uncle and gently held each of them in his arms the day they were born and many many times after. He then became their biggest cheerleader by supporting them at their extracurricular activities.

As a dependent in the US Air Force, Quinn had the privilege of traveling the world including places like Washington, Greece, Italy, Hawaii then permanently residing in Utah. From the time Quinn was 3 years old, he attended schools & workshops throughout the world where he specialized in a hug that was so strong it was unforgettable and a smile that was so big it went from ear to ear which won him awards for best smile and best hugger several times. Quinn performed in plays and graduated from The Church of Jesus Christ of Latter-Day Saints Seminary. Active with the Special Olympics, Quinn competed in Skiing, Bowling, Basketball, Baseball, Swimming, Track & Field, and Soccer all over the United States winning several metals. He enjoyed camping at Carter Creek in the Uinta’s, Dancing, was a master at pulling funny faces even at the most inappropriate times, FaceTime over the phone with his sister, loved all animals, riding horses, going to the movies, looking at the newspaper Ad’s (and then hiding them from his mom before she could read them), going to the Rodeo, watching Sports & the Game Show channel, cheering for the Utah Jazz, attending church & camps, but his all-time favorite thing to do was to roll his Hot Wheel Cars organizing them by color on the toy box built just for him by his Dad. Quinn had a love for all foods and would try anything, but he especially loved M&M’s, Popcorn, Cookies, Chicken and Pepsi.

Quinn was very patriotic. He loved the color red, the National Anthem, the USA Flag and would proudly put his hand over his heart then saluting with honor and respect that was taught to him by his dad in which they enjoyed together. He loved to watch fireworks and do sparklers on the Fourth of July. Quinn was quietly the life of the party and a big fan of all holidays, celebrations, and birthdays-with his own being his very favorite.

Quinn was born nonverbal but didn't need a voice to teach those around him how to be more Christlike. He taught by his examples. Many have said what an honor and privilege it was to have known Quinn and the impact he had on their life.  He showed his family, friends, and strangers how to love with your whole heart and unconditionally, to be affectionate, to never hold a grudge and to forgive each other, to never stop learning, and include everyone. Quinn had many gifts one of which was lifting spirits. When you cried, he cried with you, then he would pull a funny face and laugh so hard you can’t help but cheer up. Another special gift was being completely nonjudgmental. He did not care how much money you made, how you smelled, what kind of vehicle you drove, what nationality you were, the clothes you wore or the style you have, what religion you were, or what shortcomings you had, he was always ready to greet you with a hug and smile.

Quinn's family and friends doted over him with a lifetime of tender love, care, and many runs to the gas station for a Pepsi. To say he was spoiled with all the small things in life he loved and lived for is an understatement. Everyone knew who the favorite was, and he made you feel like you were his favorite too. Quinn will be missed by so many. His life was truly lived to the fullest and the lessons he leaves behind are profound. He showed us we are never too old to have fun and life is too short to be dull. Live like Quinn. Love like Quinn. Make a difference like Quinn did.

Quinn went into the next life still helping & blessing others here on earth by being an Organ & Tissue donor.

Quinn was preceded in death by his grandparents John and Elizabeth Vance, Susie Coltrane and Willie Surgeon. Aunts, uncles and a few very close family friends.

The family would like to give recognition and their heartfelt thanks to the doctors, nurses and staff at Ogden Regional ICU & Hospital for their extra special love, attention & care towards Quinn and accommodations towards his family. They all went above and beyond to give our Hero Quinn the best treatment.

In lieu of flowers, the family asks that you donate in Quinn’s memory to the Utah Down Syndrome Foundation at www.udsf.org or Special Olympics of Utah at www.sout.org

To order memorial trees or send flowers to the family in memory of Austin Quinn Coltrane, please visit our flower store.