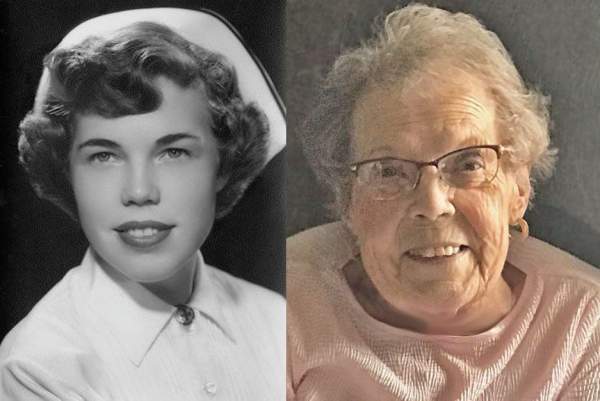 Carol May Beutler Weeks passed away peacefully on Wednesday, July 7, 2021, in her home surrounded by family.
Carol was born June 4, 1932 in Ogden, UT to Eden Winn Beutler and Stella Canfield Beutler. She attended Weber High School in Ogden, Utah, graduating in 1950. She graduated with her nursing degree from the Thomas D. Dee Memorial Hospital School of Nursing in 1953. Carol married Wendell Lawrence Weeks on June 9, 1954, and they were later sealed in the Logan, Utah Temple on July 23, 1968. Being married to an officer in the U.S. Air Force allowed her to live in many different states including Mississippi, Texas, Oklahoma, Nebraska, California, Virginia, Alabama, Illinois, and finally settling back in Utah in 1976.

Carol made a career out of what she did best: caring for others. She worked as a nurse and was made supervisor at one of her first nursing jobs in Mississippi. She continued her nursing career in Virginia and Utah, working at McKay-Dee Hospital for 15 years in the rehab unit, retiring in 1993. She remained active serving in leadership positions in the nursing school alumni association. Carol voluntarily made nursing caps for the funerals of fellow nursing alumni who passed away before her. Her compassion as a caregiver did not end. She tenderly took care of her mother until she passed away at the age of 101, and also her husband, who was a double amputee until he passed away.

She loved sewing and teaching her children to sew. She was an accomplished quilter who made quilts for every one of her children and grandchildren, each one hand-stitched with love. She had an extensive collection of keys and always had toys and activities for her grandkids. She also compiled her own book of jokes, which has kept us in stitches. She added to it just days ago.

Carol was a devout member of the Church of Jesus Christ of Latter-day Saints, holding many service-related callings, including Relief Society President in her ward in Virginia while her husband was deployed to Vietnam.

Carol was preceded in death by her husband Wendell L. Weeks in 2011; parents; Eden and Stella Beutler, her sister Lynne Tupper, and sister-in-law LaDella Beutler.

A special thanks to her many caregivers, especially her five daughters who were committed to lovingly caring for mom in her home with the dignity she deserved in her final days.

Her life was a blessing, her memory a treasure.
She was loved beyond words and will be missed beyond measure.

Funeral service will be Monday, July 12, 2021 at 2:00 P.M. with a viewing held one hour prior to the funeral service at Leavitt’s Mortuary.

To order memorial trees or send flowers to the family in memory of Carol May Beutler Weeks, please visit our flower store.