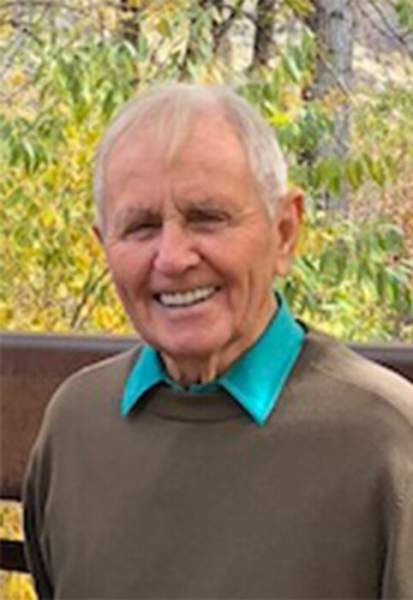 Clyde Vern “Butch” Hoffman Jr., 82, left this world on Wednesday, Jan. 27, 2021, bound for a new starting gate, a bluebird day, unlimited fresh powder and open fairways. He passed away at his home in the care of his loving family.      Butch lived large. He worked hard and he played hard. He and his wife Linda (and his mother, Elsie) took a run-down laundry business on Washington Boulevard and built it into Hoffman Cleaners, an enduring staple in the Ogden business community for 60 years before they sold it in early 2019. As a ski racer, coach, promoter, official, supporter, and activist, he was without peer — as good a friend as Utah skiing has ever known. You could put a blindfold on Butch, spin him around till he’s dizzy, and he could drive you to Snowbasin Ski Resort without missing a curve.        When he wasn’t working at the cleaners or skiing, he could often be found golfing at the Ogden Golf and Country Club with family, buddies, and dear friend Robert Herrmann. He also loved fast cars and fast boats. At 15, he helped build the Ogden Pineview Yacht Club and was one of its early members. He was also a master bowler and spent a lot of time at Paramount Bowl hustling games in the evenings. In the end, he bowled a perfect game.      Butch, an only child, was born on April 10, 1938, in Denver, Colo. to Elsie and Clyde V. Hoffman. He graduated from Ogden High School in 1956. Linda, Butch’s wife of 60-plus years, aided and abetted him for his entire adult life. Her support and encouragement have been the equal of his passion. Together, they have made the terms “Hoffman” and “skiing” synonymous — in Ogden and throughout the Intermountain West. They were married on February 12, 1960, in Ogden.      He was most alive in the mountain snow. He learned to ski from his father, Clyde, a World War II paratrooper. He ski raced for Ogden High School, then competed in Intermountain Division races throughout the West. Among many of his accomplishments in ski racing was winning the giant slalom at the U.S. National Veterans Alpine Championships in 1965. As a coach, he was certified at Snowbasin’s Earl Miller Ski School and spent a lifetime instructing others on how to ski and ski fast.    As he crosses the finish line, Butch leaves many legacies behind. The list of young people he taught, helped, motivated, and influenced is easily in the hundreds. He is a recipient of the USSA Intermountain Division’s Don Reddish Award, an honor given “to the person in the division who contributes most to youth and organized skiing.” He has served as competition director of the Intermountain Division, as head coach of the division ski team on numerous occasions.       His children are the accomplishments he was most proud of. Scott (Julie Denkers-Bishop), Heidi (Gordon Perry), and Kathy McRae all followed in his ski-racing boots. His son, Scott, was an All-American skier at the University of Utah and a member of the United States Ski Team. Butch’s daughters, Heidi and Kathy, both skied collegiately at BYU. Heidi, who won the U.S. Junior Olympic slalom championship as a 16-year-old, was a four-year All-American at BYU. Kathy was a college All-American and national champion her freshman year. They also inherited his love for life, for the mountains, and his incredible work ethic. His great sacrifice was never lost on his children. It was not unusual for him to wake early for work and then leave the family business to drive them to their next race, whether that was up a nearby canyon or in a neighboring state. He always did so with such aplomb and enthusiasm that his attitude and perspective found its way into their competitive hearts.   Butch is survived by his wife, son, and daughters, seven grandchildren: Haley and Jesse Hoffman, Ciera and Hunter Perry, Christa, Courtney, and Todd McRae; and three great-grandchildren. He was preceded in death by his father, Clyde, and his mother, Elsie. The family would like to thank Intermountain Homecare & Hospice for helping Butch pass with peace, dignity, and comfort.   We know Butch would also like to thank all of the wonderful employees who worked side-by-side with him to make Hoffman Cleaners a success for six decades.   If your life has been touched by Butch, please join us for a celebration of life at a later date to be determined. Due to COVID-19, a private family service will be held Tuesday, February 2, 2021, at Leavitt’s Mortuary 836 36th Street Ogden, Utah. Interment at Washington Heights Memorial Park.   In lieu of flowers, please send donations to a charity of your choice.   And to Butch, we send you off with love and fond memories. We will continue taking runs at Snowbasin in your honor. Condolences may be shared with the family at www.leavittsmortuary.com. To send flowers to Clyde's family, please visit our floral store.
To order memorial trees or send flowers to the family in memory of Clyde Hoffman, please visit our flower store.