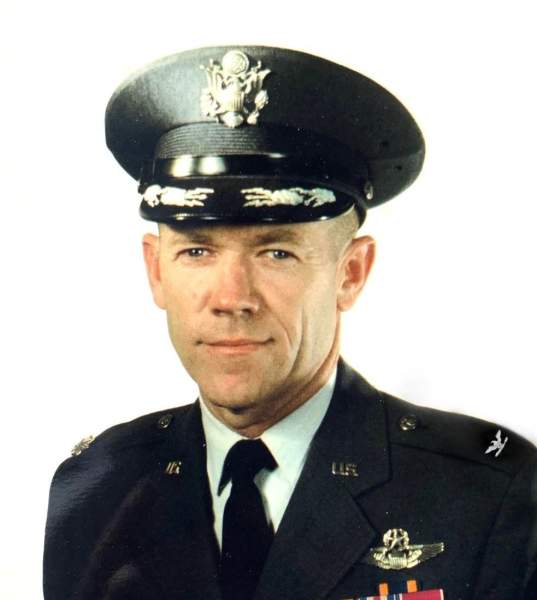 He was born on January 2, 1924, in Patterson Louisiana, the first son of Patrick and Marjorie Kuhlman Kenny.

Patrick attended Texas A & M, enlisted in the Army Air Corps, and was commissioned from Aviation Cadet program which fulfilled his dream to be a pilot.

While stationed at Tinker AFB, Midwest City, Oklahoma he met and married Jan Byrd in 1947.

Dad’s military career as Col. “Shamrock” Kenny flew the Berlin Air Lift, was the first pilot to log 1,000 hours in the B-47, was an experimental test pilot, graduated from Air Command and Staff College, commanded the 8th TB Squadron in Japan and Korea, commander of three defense systems evaluation squadrons in the Air Defense Command, combat pilot in SEA-Vietnam and ARMISH-MAAG Tehran, Iran.

After 31 years of service he retired from Hancock Field, N.Y. and was honored with many awards including Golden Glove Lightweight Boxing Champion, Legion of Merit, Silver Star and Distinguished Flying Cross.

Continuing his passion for flying he and mom frequently flew his Cessna 182.

Dad was proceeded in death by our mother whom he deeply loved and cherished, and our brother, Paco.

To order memorial trees or send flowers to the family in memory of Col. Patrick H. Kenny Jr. , please visit our flower store.

Memorial Gardens of the Wasatch