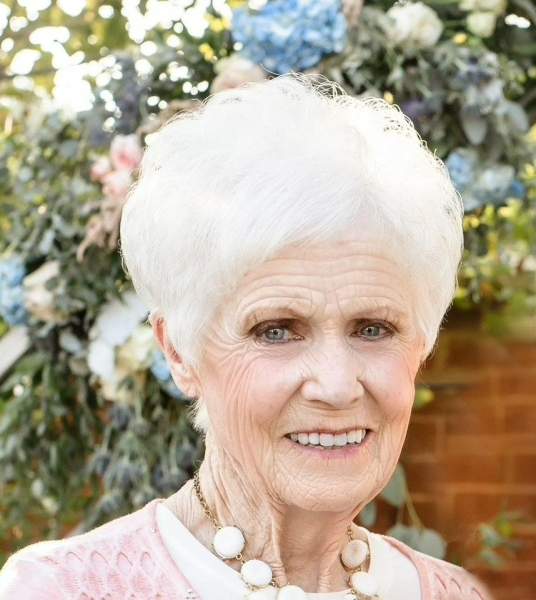 Colleen Bennett Reid peacefully passed away on August 6, 2022, surrounded by her family.  She loved her family with all her heart.

Colleen was born December 4, 1935, to Jesse and Elda Bennett.  She was raised on the family farm in West Point where she learned the value of hard work and family.  She grew a garden on that farm until the last few years of her life.  She also had an immaculate yard and took pride in her prized flowers. Many families, neighbors, and strangers were blessed with the produce from the beloved garden at Bennett Farms or by visiting with her in her back yard which she liked to call her ‘secret garden’.

At a very young age, she fell in love with her grandmothers’ piano and since they lived next door, she would go over every day to play it.  Her parents and grandparents purchased a piano for her which was a great financial sacrifice during the depression.  She loved music almost as much as she loved her family.  She touched many people through her gift at the piano and organ.   She served as the ward organist for 68 years and also played on countless other occasions including a unique opportunity to play the organ at the Tabernacle on Temple Square.  She played professionally for Leavitt’s Mortuary in Ogden.

She attended West Point Elementary, North Davis Jr High, and Davis High school.  While at Davis High, the Student Body President, Paul Reid, caught her eye.  They were married in the Logan LDS Temple on July 15, 1954.  They moved to Sunset and raised their five children.

She will be remembered for the love and compassion that was shown to all.  She had an elegance and grace that attracted anyone around her.  She was either comforting someone, sending over a meal which included her famous hot rolls, or providing some type of service.  She was always serving someone.  As her own parents and Paul’s parents aged, Colleen took an active role in caretaking for them daily during their final years as they battled various health challenges.

She served in many Church responsibilities and had an unshakable faith in the gospel of Jesus Christ.  She served as the Temple Matron in the Ogden LDS Temple as her husband Paul was serving in the Temple Presidency.  She worked tirelessly on her family history and genealogical research.  She deeply loved her ancestors.

Colleen was also an exceptional leader.  Her unique leadership abilities were manifest in every element of her life, from homemaking to child rearing, to community, and in numerous church responsibilities.  Her gift for music was equaled by her gift to communicate.  In large groups, in small groups, and especially one-on-one.  She was so gifted in recognizing and drawing upon other’s strengths while charitably sharing those of her own.

Colleen was proceeded in death by her parents Jesse and Elda, her beloved husband Paul, a grandson James Dickson, and a great granddaughter Shaylee Reid.  She looked forward to that reunion.

Our family would like to thank the dozens of caregivers, medical staff, ward members, neighbors, and friends who assisted mom in some way as her health declined.  The staff at Beehive Care Center in Syracuse in particular became like an extension of family to mom during her residency there.

Interment will be at the Clinton City Cemetery.

Services will also be streamed for virtual participants using the following link:

To send flowers to the family in memory of Colleen Bennett Reid, please visit our flower store.