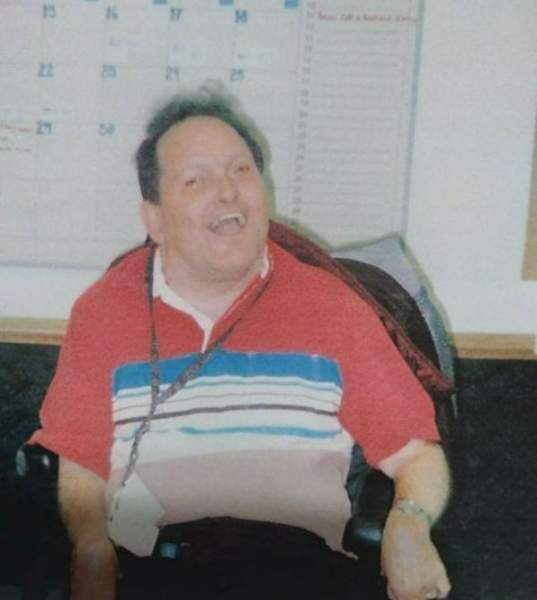 Our loving brother, Dennis Albert Dantz returned to his Heavenly Father on Tuesday, December 7,2021. He was born February 5,1950 in Long Beach California at Camp Pendleton to James Albert Dantz and Mildred Johnstun Dantz. Dennis was born with Cerebrally Palsy. He attended the Pacific State School, where they taught him to read, write, and motor skills. He was in two different training schools while living in California for some time.

One of Dennis most loved and favorite times in his life, was when his dad came into port on one of the ships, he was on at this time in 1956, USS Shangri La an (Aircraft carrier.) His dad had been out to sea over a year this time. His dad would run up to him and hold him and put his Navy hat on his head. Dennis would grin from ear to ear. He loved his dad so much. Every time we talked on the phone; he would tell me how much he missed his dad and Connie.
Dennis was then transferred to American Fort Training School later in 1966 and was there for some time too. Going to school, working doing small jobs, and writing stories and plays. He loved to write. While at American Fort Training School he met Connie Harding his wife, love of his life and soul mate. He said, he fell in love with her beautiful eyes, and they married Jan 6, 1990, at Jordon River Temple. They were married for 26 years.
They move to West Valley after they were married and lived in an assisting living apartment, for over 8 years. Dennis worked at United Cerebral Palsy of Utah doing assembling work and other odd jobs. Dennis like to write stories, small plays, make crafts, listening to all kinds of music and watching TV, going out to the Disney on Ice shows, State Fair, Circus when it came to town, rides in the car and going out to eat, and lots of other fun things.
Dennis and Connie moved one more time. To Manor Care Center in Ogden, now (South Ogden Post-Acute) in July 2015. Dennis, wife and soulmate, Connie passed on in Feb 11,2016. Dennis was well loved and loved Manor care. He was a Great Bingo player. Did activities, make pictures,
Watched tv and movies, listen to CD music and radio, tried karaoke, played on his computer and many more things. He had a small store that he sold pop, candy bars and other small food items to people in manor care. A hobby. It was called Dad’s Candyland. Dad’s stands for Dennis Albert Dantz. Dennis loved his grandmothers Posey, Christmas popcorn balls. He loved all his family and friend so much.
He was a member of the Church of Jesus Christ of Latter-Day Saints where he attended.
Survived by his sister, Dawn R. Dantz, Ogden Ut, brother Allen and (Nan) Dantz, Saint George, UT and Brother Michael R (Freida) Rogers, Sydney Australia. His half-sister Kay Fletcher, Tonopah Az. Also, many nieces and nephew and great nieces and nephew on both sides.
He was preceded in death by his wife Connie Harding Dantz, his parents James and Mildred Dantz Ut, and grandparents Arthur Allen,( Blanch ) Posey and Verdie and Birdie(Gaddis Dantz Davis).
Very Special thanks to all the staff at South Ogden Post-Acute and all the aids, and nurses. They did a great job assisting him all these years.
There is a Celebration of Life, at South Ogden Post-Acute, that will be held Saturday 18th from 1:00 to 4:00 pm for family and close friends.

To order memorial trees or send flowers to the family in memory of Dennis Albert Dantz, please visit our flower store.