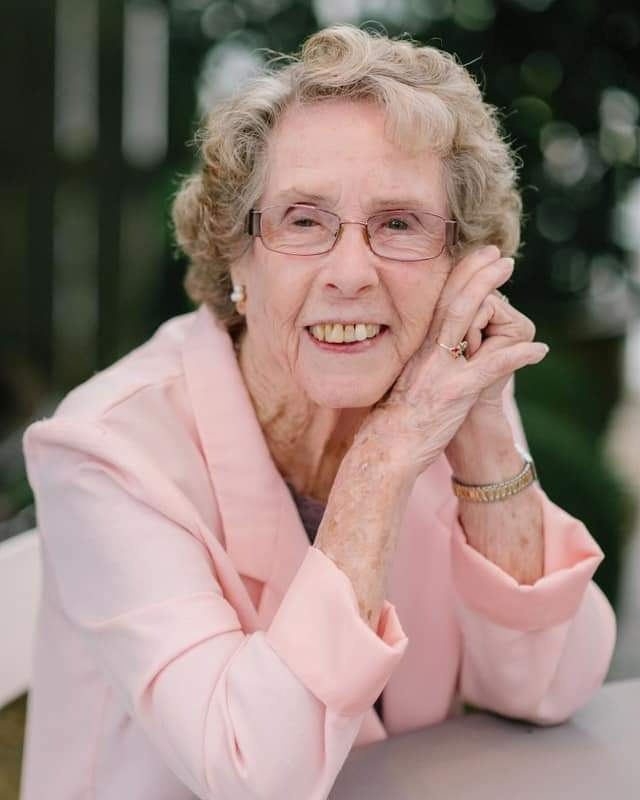 Donna Lou (McAllister) Wade, 94, passed away on Thursday, November 17, 2022, at the Ogden Regional Medical Center surrounded by her loving family. She was born September 20, 1928, to Luther and Susanna McAllister in Mesa, Arizona. From an early age, Donna was always energetic, full of life and adventurous. She spent most of her childhood days in a swimming pool and later taught her children and many of her grandchildren to swim. She graduated from Mesa High School where she was a cheerleader and student body officer. In her senior year she met a handsome young sailor named Alfred Byron Wade. They were married on April 11, 1946, after her graduation and later sealed in the Mesa Temple. They settled in Ogden, Utah where they raised their family of five children. In 2012 Donna and A.B. moved into the home of their grandson, Michael Newton, his wife Laura and four grandchildren where they lived out their final days.

She was active in the Church of Jesus Christ of Latter-day Saints her entire life and served in the Primary, Sunday School and nearly 30 years in the Young Women’s program. She loved the young women she served with. When driving the girls home from an activity, she would often take a detour to “drag” Washington Boulevard so the girls could search for cute guys! She also had many Young Women sleep-overs at her home and loved to take them to Bear Lake. Donna also served as an ordinance worker in the Ogden Temple, along with her beloved husband, A.B. for several years. Even in her 90’s she was serving as a co-teacher in a Primary class of one of her great grandchildren.

Donna was the head grocery clerk for Safeway and Albertson’s for nearly a decade and then started a new career as a dental assistant with Dr. Bart Wolthuis, where she not only assisted at the dentist chair, but she also became his personal secretary as Dr. Bart served as Mayor of Ogden City and Stake President of the Lorin Farr Stake.

She loved camping, travelling—especially ocean cruises—and any activities in which her children and grandchildren were involved. She spent many hours embroidering pillowcases and dish towels to give as wedding gifts. She made each of her grandchildren a full-size quilt for their high school graduation as well as a baby quilt for each great grandbaby that came along—a total of 72 baby quilts.

She is preceded in death by her husband of 67 years Alfred B. Wade (A.B.), her parents, Luther and Susanna McAllister, and her brothers and sister—Edmund McAllister, Marvin McAllister, Dorthy Bruffy, and Bill McAllister. She lived life well, was loved by all who knew her, and will be greatly missed.

To send flowers to the family in memory of Donna Lou Wade, please visit our flower store.