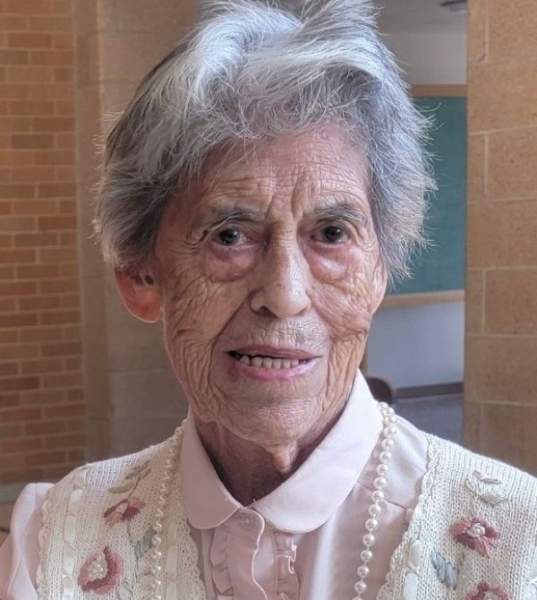 Our dear mother (our North Star) passed away August 4, 2022 – just shy of her 101st birthday.  She was born September 1, 1921, to Maria Margarita and David Mack Allen in Mora, New Mexico.  Mom lived a difficult life as a young girl.  Her father died in a Cleveland Roller Mill accident when she was 3 months old.  Her mother, Maggie and her children, struggled during the Depression to keep their crops bountiful enough for their livelihood. Mom was no stranger to hard work.  She graduated from Mora High School and at the age of 19 she adventured to Del Norte, Colorado with her sister Annie Allen where she took a job in the St. Joseph Hospital as a nurses’ aide and bakers’ assistant.  It was in Del Norte that she met her sweetheart, Perfecto (Pete) Vigil.  They were married in 1943 in Mora, New Mexico.  At the time of his death, September 20, 2010, they had been happily married for 67 years.

During World War II, Mom and Dad lived in Richmond, California supporting the war effort.  In 1945 they moved to Ogden, Utah where she worked at J. J. Newberry while searching for their home.  She was a homemaker all her adult life and loved baking, gardening, sewing and being an excellent mother.  When her children were young she taught Sunday school at the Trinity Presbyterian Church.  She and her beloved Pete traveled all over the western states until his death.  Their favorite trip was attending the 1986 World’s Fair/Expo in Canada.  Mom lived in her home until the last two months of her life when she was moved to Sunridge Memory Care in Roy.  A special thank you to the Sunridge Memory Care staff and Atlas Hospice.

At her request a graveside blessing will be under the direction of Leavitt’s Mortuary on Thursday September 1st at 11 a.m. followed by a Birthday/Celebration of Life will be held in the Leavitt’s Mortuary Atrium 836 36th Street, Ogden, Utah,  from 12-2 p.m.  Condolences to the family may be expressed at www.leavittsmortuary.com/obituaries/doraavigil.  In lieu of flowers please consider a donation to the charity of your choice.

To order memorial trees or send flowers to the family in memory of Dora Allen Vigil, please visit our flower store.