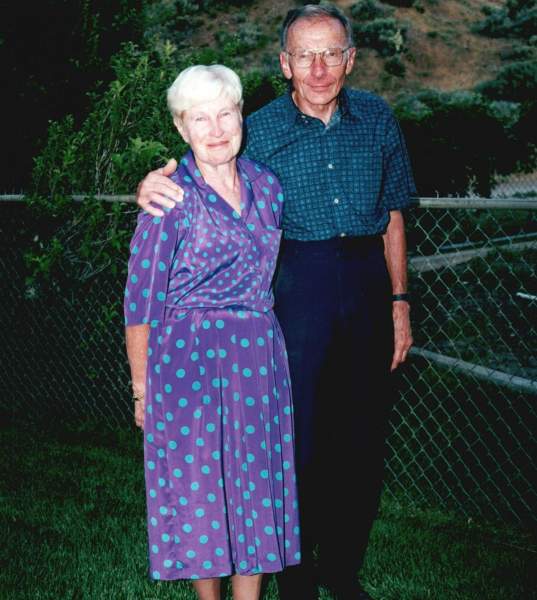 He leaves behind his beloved wife Rita with whom he enjoyed 73 years of marriage. He was a devoted husband and father, and the family shared a lifetime of adventures together.
Dwayne was born in Ogden, Utah on December 21, 1925, to Elvira L. Rice and Raleigh Manful. He married Rita Briggs on June 6, 1949. To this union was born two children, Ann and Rich.
He graduated from Ogden High School, spent a short time in the Army and then went on to earn both a Batchelor's and Master's Degree from Utah State University in Elementary Education and School Administration. He had a distinguished career in Weber School District serving as a teacher, Principal, Supervisor and Director. He was known for his integrity and honesty. He cared deeply about the students, parents, faculty and staff.
Inherent in Dwayne's DNA was a strong work ethic, which he passed on to his children and grandchildren. This notable trait was evident in all facets of his life, from parenting, yardwork, hobbies and in his professional career. He also had the unique ability to balance hard work with hard play.
His love of skiing started as a boy and was a lifetime sport he enjoyed well into his
eighties. He would tell stories of the early years of Snowbasin which included using dynamite to clear the rocks on Wildcat Bowl. Dwayne raced for Utah State on the ski team, taught skiing for over fifty years and worked on the course crew of the Wildflower Downhill for the 2002 Winter Olympics. He was 76 years old at the time of the Olympics. His last assignment was to be the liaison with local schools for the fourth grade Learn to Ski program at Snowbasin. His leadership skills were invaluable in organizing these events to help children enjoy the outdoors.
In his late forties he started bicycling and went on to do several century rides. After Rita retired, the two of them could be spotted riding their tandem bike daily in Weber County. He also became an avid sailor.
He was known by both his son Rich and grandson Eric to be able to fix anything. He shared his love and knowledge of tools with them, many projects were completed by the three of them working together.
He is remembered lovingly by his posterity for the time he took taking them backpacking in the Wind Rivers. He also passed his love of skiing on to them as he coached them both to compete for the Utah Racing Ski School.
It is with thankfulness that we can say that Dwayne lived a life well lived.
He is survived by his wife Rita, his daughter Ann Miller and son Rich (Reeta) grandson Eric (Caitlin) and great granddaughter Alice.
He was preceded in death by his parents, his brothers Glen and Jerry, son-in-law Alan Miller and grandson Hank Manful.
A Celebration of Life will be held on Sunday, January 16th from 2:00 to 5:00 PM at the Eccles Community Art Center located at 2580 Jefferson Ave.
In lieu of flowers, make a donation to the charity of your choice. Think of Dwayne as you enjoy your friends and family.

To order memorial trees or send flowers to the family in memory of Dwayne E. Manful, please visit our flower store.