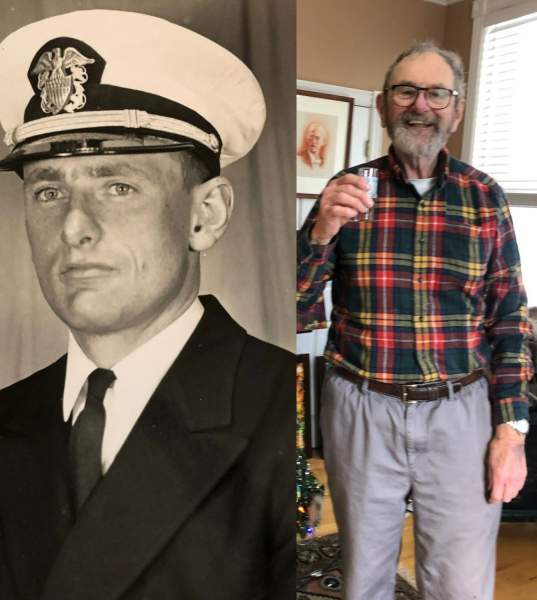 Ernest Lamond Goff known as Lamie passed May 5, 2022, from AML cancer. Diagnosed in late February he was a fighter to the end at home with Encompass Hospice Care.

He was loved by many who spanned the country East, West, Midwest, North, and South. Ernie “Lamie” grew up in Rehoboth, Massachusetts on a New England dairy farm with his mother Dorothy a schoolteacher and his father Ernest Sr a dairy man and his brother David seriously disabled. He graduated from East Providence high school and later went to Dartmouth College (‘61) on an ROTC full scholarship program. He served in the Navy as a ship officer. He also graduated from Naval Justice School in Newport RI.
Following four years seasickness he changed his naval career goals and became a disability lawyer graduating from Duke Law School in 1968. He practiced early on corporate law in New York and then opened his own law practice in Brockton, Massachusetts where he focused largely on disability law and personal injury cases.
In his early practice he barely survived spinal meningitis and after several months with medical care at Brockton VA Hospital he restarted his law practice once again. He shared a working office with Bill Quaglia. He continued his disability support for clients in Brockton area among which clients was his storied personal injury case on Pegleg Joe.

At this time he met Cindy Jablecki Bryden at an AMC social potluck event in 1993 where they shared common stories while at East Providence High School. Cindy was Ernie’s lifelong partner for nearly 30 years. They married recently 4/20/22 “forever”.

Ernie retired in Huntsville, Utah as a nature and ski enthusiast where he enjoyed the “best snow on earth”.  He was an excellent skier having learned his techniques from Johannes Von Trapp at Dartmouth College.  He was also an avid kayaker and assembled his kayak group on Pineview Reservoir every year.  He could kayak like a motorboat with his strong paddling skills. Few could keep up with his powerful strokes. He loved hiking, biking, downhill skiing, cross country skiing, and snowshoeing. Cindy was his avid partner in all nature sporting activities.

Ernie also lived several months each year with his lifetime partner in Cannon Beach, Oregon where he volunteered enthusiastically at Haystack Rock with visitors from all over the world looking for the “clown like “Tufted Puffins. He loved bird life and enjoyed marine life with his Cindy his marine biologist partner. Ernie loved working with HRAP Haystack Rock Awareness Program volunteer and education group. He became one with all sea birds at the Rock often taking flight with them.

There will be a brief memorial get together at Pineview Bluff Beach after Memorial Services at Leavitt’s Mortuary 836 36th Street, Ogden, Utah on May 15, 2022, at 6:00 p.m. to remember and share storied events with Ernies friends. Come share your memories with Cindy and friends. His final resting place will be with his family in Rehoboth, Massachusetts. We will miss him dearly.

Memorial Donations can be given to HRAP C/O Education and Volunteer Coordinator Lisa Habecker designated to the Education Program in Cannon Beach Oregon 97110.

To order memorial trees or send flowers to the family in memory of Ernest Lamond Goff, please visit our flower store.