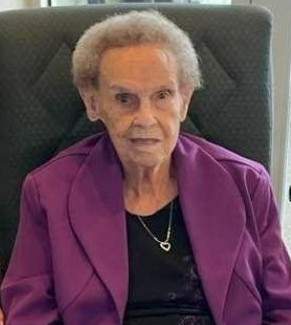 Geraldine passed away peacefully on March 15, 2022.

She was born in Brigham City, UT to James Ezra Jacobson and Leonora May Shepherd on December 14, 1921.  At the age of 2 her family moved to Ogden, where she spent the remainder of her life.  Geraldine was the youngest of four children: Bernice, LaVar, Coniver (all deceased).  She attended Ogden City schools and graduated from Ogden High School in 1940 as part of the second graduating class.  She married Harold Creer on June 28, 1941.  They were married for nearly 71 years before Harold passed away three days before their 71st anniversary.  They were blessed with three children: James R. Creer, David H. Creer, and Diane Creer Moyes.  All three of her children preceded her in death.  She is survived by six grandchildren, 15 great-grandchildren and six great-great-grandchildren (one deceased). She is also survived by several special nieces and nephews.

Geraldine was a stay-at-home mother until her children were grown. She then managed an apartment house in Ogden for 10 years.  She also worked at Max Factor, a cosmetics distribution center, for 4 years until she retired.  She enjoyed reading, embroidery, puzzles, her garden, and spending time with her family and friends.  She especially enjoyed the many friends she had at Country Pines for the last 7 years of her life.  On December 1, 2018, she went to the Odgen temple of The Church of Jesus Christ of Latter-Day Saints to receive her endowment and have her husband and children sealed to her.

To order memorial trees or send flowers to the family in memory of Geraldine Jacobson Creer, please visit our flower store.