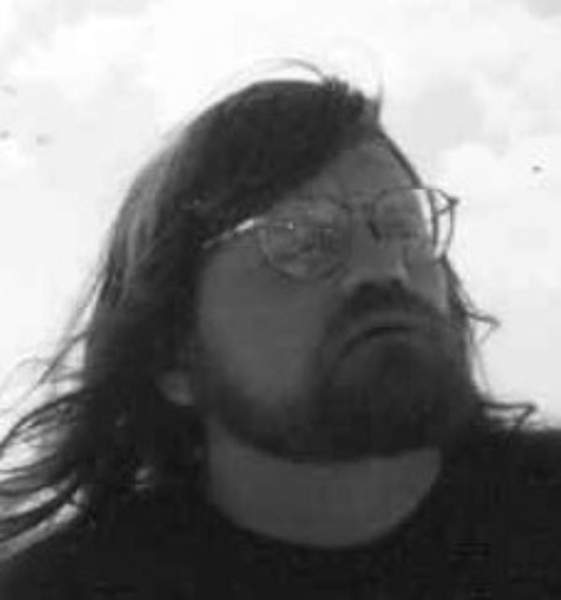 Mark Morris Sparkman was born February 6, 1956, in Grand Prairie, Texas. He was the fourth of the nine fine children of David Morris and Dorothy Jean Sparkman. Following numerous bouts of non-Covid pneumonia, he passed away on June 21, 2021.

As a toddler, Mark lived in California, where his mother warned him to watch out for the sneak-up birds (roadrunners). The family later moved to Utah, where they lived in Corinne, then Brigham City.

At Box Elder High, Mark excelled in drama and debate. He had a love for literature of all kinds, from comic books to Shakespeare, and began writing short stories, poetry, and songs. As an adult, he won many poetry and short story competitions. He loved music and played guitar in a rock band with friends. The band went through many changes as members came and went, but Mark treasured every version of the band. Mark made friends wherever he went and forged lifelong friendships with Mike Thyberg, Lonnie Lister, and Leslie Jensen Williamson.

Mark attended the University of Utah on scholarship, majoring in theater arts and debate. He later transferred to Weber State College, where he continued his debate career, traveling to many regional and national competitions. He left Weber to pursue other interests but later returned as an English major. Living in Salt Lake City, Mark was part of TheatreWorks West, performing in several productions.

While in SLC, he married Christine Bernal. They were later divorced.

After moving back to Ogden, Mark married Janet Lee, whom he later divorced.
Through a series of coincidences (or God moments), Mark was reconnected with his high school sweetheart, Kim Quick. They married on July 27, 1991. Along with his new wife, he also gained two stepchildren, Jason and Heidi. Jason would later add four grandchildren to the family. Mark was overjoyed to be Grandad to Terrie, D’Artagnan, Kimberly, and Aramis. One of Mark’s proudest moments was walking Heidi down the aisle at her wedding.

With Kim’s support and encouragement, he began acting again, mainly at Terrace Plaza Playhouse, and was directed in many of those productions by his dear friend, Carolyn Stevens. Among his favorite roles were Shylock in “Merchant of Venice,” and Fagin in “Oliver!” He was also blessed to continue acting after paraplegia confined him to a wheelchair. He was proud of having the role of Mr. Potter (Lionel Barrymore’s part) in an on-stage radio-style performance of “It’s A Wonderful Life” at Ziegfeld Theater.

Mark was preceded in death by his parents, and his brothers Stephen and Daniel.

He is survived by his dearly loved wife, Kim; brothers David (Leta), James (Robbi Dawn), Timothy (Amy), and Thomas; and sisters Becky (Brent) Johns and Debra Sparkman.
He is also survived by his parents-in-law, Bob and Jean Quick, whom he loved as his own parents; his stepchildren, Jason Schad and Heidi (Kevin) Wahlquist, and his four beloved grandchildren. He was loved and will be missed by many brothers-in-law, sisters-in-law, nieces, nephews, and friends.

The family would like to thank the following: Ogden Regional Medical Center staff for the great care Mark received on his many visits; the staff at ORMC Wound Clinic who became dear friends, in addition to being great caregivers; and CNS who provided Mark with wonderful home care. Mark’s nurse for almost seven years, Tyler, was like a son to him, and Mark formed friendships with his CNAs, especially MaiLynn, Sara, and Star. Also, many thanks to Pastor Bruce Grentz and the members of Our Savior’s Lutheran Church in Roy for their love, prayers, and many acts of kindness.

As Mark desired, he will be cremated, and his remains will be scattered in various areas that have been important to him in his lifetime.

To order memorial trees or send flowers to the family in memory of Mark Morris Sparkman, please visit our flower store.