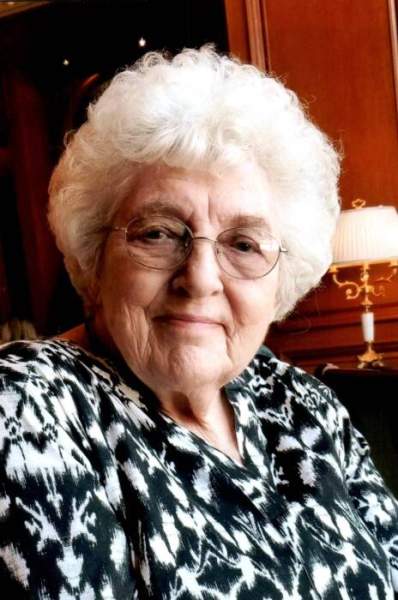 In the early morning hours of February 13, 2021, Pauline Morris, age 94, slipped away to join John for Valentine's Day.

Pauline was born May 16, 1926, in Bowes Park, Woodgreen, London England, to John Charles Watford and Beatrice Elizabeth Scott. Pauline had one brother, John Scott Watford, born in November of 1927 when she was 18 months old. They fought constantly as children but were great friends when they reached young adulthood. Mom remembers he would whip her into a "frenzy", and she would be the one who got in trouble. Mom's favorite toy was the neighbor’s baby who she loved to push around the cuI­ de-sac in his pram. Mom was a lifelong lover of animals and one of her first pets was a tortoise named Archibald. Pauline was given a kitten named “Abdulah" for her birthday, however, when "he" produced a litter of kittens, "his" name was changed to "Dulcie" or "Dullah". Mom also had a Welsh sheepdog named Bessie, and a Scottish Sheepdog named Lady. There was also a bad-tempered mutt named Nellie who bit many people. At age 14, mom and her brother were evacuated from London to the village Averham to escape the bombings.

Mom joined the Women's Land Army when she was almost 18 years old and was put to work on several farms and then a Market garden. When mom was demobbed (released from service) at the end of World War II, she was jobless for a short time and then went to work for the War Office. Mom went out of her mind with boredom. Mom then worked for C.F. Rumble, Quantity Surveyors, and loved that job. Mom worked for Boots the Chemist Library which was a pharmacy that also carried books that could be read before public libraries were opened. Mom was an avid reader and storyteller her entire life. Mom then had several positions working for the young conservatives.

In 1955 mom met and married John R. Morris. In the next 14 years, they produced five amazing children and moved 10 times! In 1970 John retired from the Air force and they bought a home in Mountain Green, Utah. They lived in that home until 1984 when they moved to Fruit Heights. Pauline was the famous "Avon Lady" for over 35 years in Mountain Green and Fruit Heights. Mom also wrote for the Morgan County News for many years. Pauline is best known for her volunteer work at the Davis County Animal Shelter. For over 30 years she was involved in the adoption program and worked tirelessly to reunite lost pets with their people. Mom had an uncanny ability to read people and animals and this resulted in countless people/pet matchmaking.

Mom was a long-time member of the British Wives Club and a member of the Church of England. Mom was also welcomed into the Fruit Heights 3rd Ward Family and enjoyed participating in relief society activities, wonderful visiting teachers, and going to a widow’s luncheon once a month. Mom's neighbors always showed her kindness.

A special thanks to extended family members Glen and Margie Messerli who lovingly watched over mom for many years following the passing of our father.

Pauline also is survived by her (ten-foot-tall) Chihuahua Ginger and her gorgeous cat Jackson.

Pauline was preceded in death by her husband of 49 years John, her parents, her brother and sister-in­ law John (Jean) Watford, beloved stepfather Sydney Waller, and stepsister Dorothy, and countless friends.

Services for Pauline will be delayed until May. We will be having her funeral and a special "tea party" on May 15th, 2021 at Leavitt’s mortuary in an outdoor setting to minimize the risk of what mom called "THE VIRUS".

We all are grateful for the many years we have had to enjoy our dear mom, grandma, and above all, our biggest fan and cheerleader. She leaves a giant hole in our lives and we will miss her every day. We are delighted that she is surrounded by all her loved ones in heaven and all the pets that met her at the Rainbow Bridge.

To order memorial trees or send flowers to the family in memory of Pauline Morris, please visit our flower store.