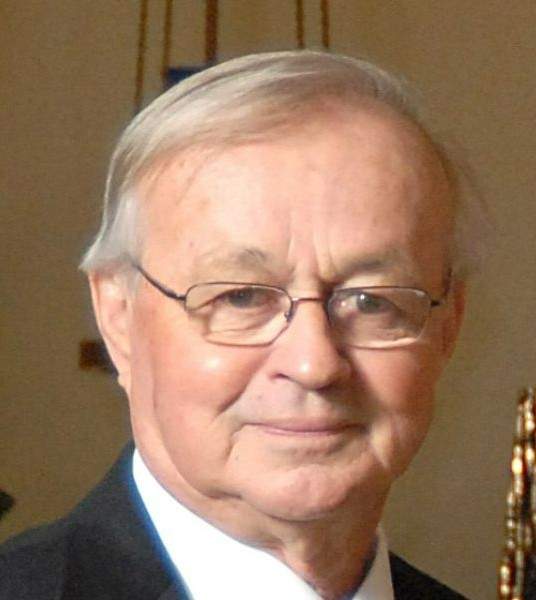 Dick was born January 23, 1935, to Raymond and Consuela (Felker) Molumby in Madison, SD. He graduated from Notre Dame High School in 1952. He joined the Air Force at 18 and completed a tour in North Africa with Signal Group. After his service in the AF, he returned to the states and met Margaret “Margie” Molumby his bride to be, a nursing student at St. John’s McNamara. Dick always liked to say he married “way up”. They were married in their home state of South Dakota on April 30, 1960, and during their nearly 62 years of marriage, they raised six children-or as Dick would say, “I raised 6 children and did it all by myself”.
In 1970 Dick’s job with the Boeing Company brought them to Ogden, Utah. He retired from Boeing in 1995 after more than 30 years of service, and from real estate sales in 2020 with close to 50 years invested in this second career. Dick and Margie often said they never expected to stay in Ogden long, but it was here that they met all their lifelong friends. Dick was adored by everyone he came in contact with. From the people he worked with, the many families he found homes for as a realtor, the people he built homes for, the schools he spent many hours volunteering for and most importantly the family he was so proud to have. Even though he held three jobs, he always made time for his children and beautiful wife, Margie. He loved family trips especially to Lake Powell and fishing with his Booster buddies, which created countless loving memories. Dick’s passions were fast cars, family, friendships, and his many beloved pet dogs.

The Molumby Family would like to express our gratitude to the many friends who crossed our dad’s path through his career and volunteering. A special thank you to the Medical Staff at the University of Utah Hospital, the U of U Kidney Transplant Team, and the Huntsman Cancer Institute
Dick is survived by his wife Margaret; children; Kathleen (Mike), Teresa, Carolyn (Lennis), Dan (Susan), Mary (Pat) & Shawna (Forest); and many loving grandchildren, nieces, nephews, and extended family.
He was preceded in death by his parents; brothers; father Don, John and Bill.
It’s just like our dad to leave this world on his birthday, always making a statement! Weather permitting, the family ask that you consider bringing your favorite sports and/or unique car to celebrate dad’s love of cars.
A Viewing will be held at Leavitt’s Mortuary 836 36th Street, Ogden, Utah on Thursday Jan 27, 2022, from 6:00-8:00 p.m. followed by recital of the Rosary. Mass Services will be at Holy Family Catholic Church 1100 East 5550 South Ogden, Utah on Friday Jan 28, 2022, at 10:00 a.m. followed by a Celebration of Life at Leavitt’s Mortuary.
In lieu of flowers, family asks that you consider donating to St. Joseph Catholic schools. https://www.paypal.com/donate/?hosted_button_id=MU...

To order memorial trees or send flowers to the family in memory of Richard David Molumby, please visit our flower store.