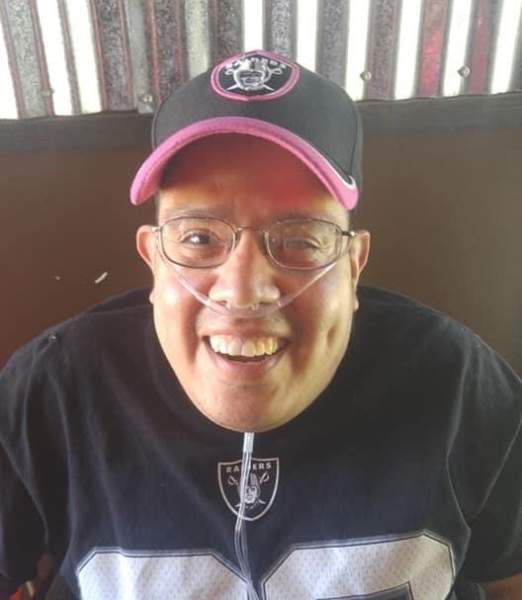 Recitation of the Rosary

It is with profound sadness that we announce the passing of Santiago C. Sandoval, Jr. (Santi) on Sunday, August 30, 2020. He passed away unexpectedly in the early morning hours in his sleep at home. Although it leaves a void in our hearts, we know that he is reunited with his angel mother, whom he dearly missed since the day she earned her angel wings.

Santiago was born to Jim and Elaine Sandoval in Ogden at St. Benedict’s Hospital. He was born with Spina Bifida and was not expected to survive the night. As he liked to announce every birthday, that was the first of MANY times that he would defy all the odds. Over the years, the medical field was unable to explain why he would get sick or what was making him better. Family was told that they must be a “family of faith” because there was no medical explanation. This faith helped him succeed in 43 years of life.

Despite Santiago’s many challenges, he was extremely happy to be able to live a very independent, fulfilling, and blessed life. One of his earliest community recognitions was in 1984 when he was selected for the poster child for the United Way of Northern Utah. He has always had an infectious smile, laugh, and personality.

Santiago attended school in the Ogden City School District where he developed special relationships with his teaching and supportive staff and his classmates. He graduated from Ogden High School in 1996 where his father was able to present him with his high school diploma. While he was attending high school, one of his greatest accomplishments was being selected as Manager on the Varsity basketball team. He briefly attended Weber State where he thrived in the social side of college education.

Santiago never met a stranger and developed many “family” groups whom he loved, and they loved him back. One of which was at Fanzz Sports Apparel in the Ogden City Mall where he started as a volunteer greeter shortly after high school. He was eventually hired by the company and was employed for over 10 years. Bout Time Pub and Grub became his next frequented spot in the Newgate Mall and was eventually offered a job as an ID checker where he was paid to watch his favorite sports all day long. After his employment ended, he continued to spend time with his Bout Time family at both the Ogden and Layton pub. He was a staple at both the Newgate and Layton City Malls and he treasured everyone he met and got to spend time with there.

Santiago was a devout Raiders, Dodgers, and Utah Jazz fan (unless they lost, then they were EVERYONE else’s teams). If those were NOT your teams, you DEFINITELY heard about it. His love for the LA Dodgers extended to the Ogden Raptors. He was a season ticket holder, and this is where he developed his Raptors family. For anyone that may not have been able to see his apartment, it was decorated like a sports memorabilia shrine with all the above teams.  One of his greatest joys was showing off his sports pride. RN4L!

Santiago enjoyed traveling and spending time with his family and friends; attending sports events with his “favorite” brother-in-law, Meo; and attending concerts and listening to music, especially music from Neil Diamond, Bruce Springsteen, Kenny Rogers, and the Oakridge Boys. He also loved hosting watch parties for WWF/WWE and attending live events when they came into town. He whole-heartedly enjoyed helping look after his two nephews, Jordan and Austin.

Santiago was an active member of the Catholic faith and attended the Holy Family Catholic Church as his parish.

He was preceded in death by his mother, Elaine; grandparents, Fillie and Stella Sandoval; his beloved chihuahua, Raider; his nephew doggie, Pugsley; and many other loved ones.

The family would like to send their deepest gratitude to all the doctors and nurses from Primary Children’s Hospital, Ogden Regional Medical Center, and all the drivers and staff from his Paratransit family. Also, a special thank you to Dr. Stephen Bruce for his treatment and compassion for Santiago.

In honor of Santiago, the family would love if you dressed up in any of his favorite sports gear or team colors.

A private mass will be held for immediate family.

Graveside Services will be held on Wednesday, September 9, 2020, at 11:15 am at Leavitt's Aultorest Memorial Park.

In lieu of flowers, donations can be made to Primary Children’s Hospital in his name.

In his memory, live life to the fullest and have a super day!!!

To order memorial trees or send flowers to the family in memory of Santiago C. Sandoval Jr., please visit our flower store.

Recitation of the Rosary