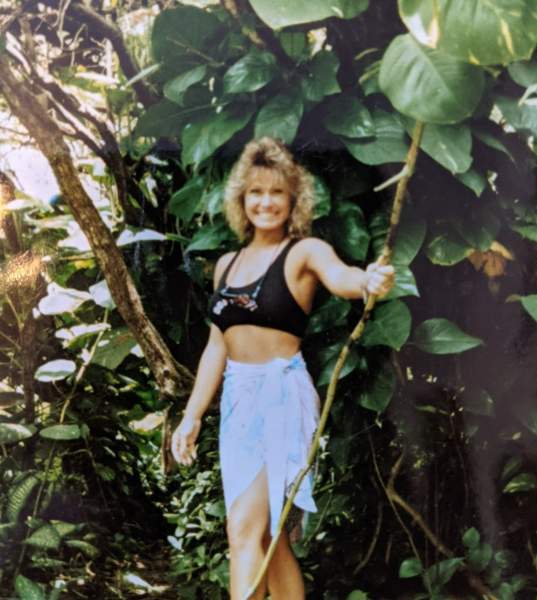 With broken hearts we regretfully announce the passing of the magnetic Sherry Mae Ewing, age 62, Saturday, December 4, 2021 in Mesquite, Nevada. Sherry came into this world with a lifelong partner and identical twin Terri Waudby. Sherry was the youngest daughter of William Gilbert and Velma Mae Weaver, reared and educated in South Weber, UT.

On August 13, 1987, Sherry married Jeffrey Allen Fullmer, though they later divorced, they stayed lifelong friends. On March 9, 2005, Sherry married Scott Hal Ewing.
A radiant woman, Sherry grew up in the LDS faith; later in life she converted to Catholic. She enjoyed painting pottery, collecting Barbie dolls and crystals along with numerous other adventures. Sherry was a horror and Halloween buff who never missed a chance to decorate when that time of year came.
Although you would think Sherry would have difficulty hearing after years of loud music played, she enjoyed long conversations with her sisters, her children and friends. Sherry was extremely friendly and outgoing, and she would go out of her way to compliment perfect stranders often giving compliments and gifts at random.
Sherry graduated high school with honors and held many positions at different companies, ending up at the IRS in Ogden where she retired after having received multiple awards.
Sherry had two wonderful children she adored, Kristopher Richard Fullmer and Krystal Ann Fullmer. She often told her kids they were the reason for life.
Sherry is survived by her loving husband and elementary school admirer, Scott Hall Ewing; son Kristopher Richard Fullmer, one grandson; daughter Krystal Ann Fullmer; sisters Patty Lee Johnson, Vicki Chris Taylor, Cindy Ann Noon, Terri Sue Waudby; stepdaughter Sara Ann Grossenbach; and five grandchildren.
Sherry was preceded in death by her father William, mother Velma and brother Steven Weaver.,
A service to celebrate Sherry’s life will be held March 9, 2022. Details forthcoming.

To order memorial trees or send flowers to the family in memory of Sherry Mae Ewing, please visit our flower store.