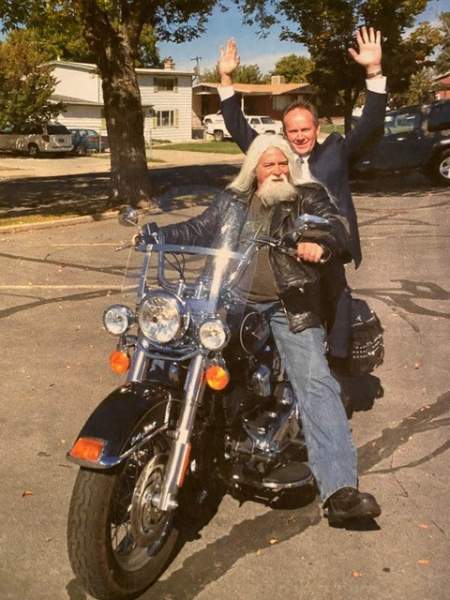 Thomas O. Olsen passed away on January 8, 2021, at the age of 67 from heart failure. Tom was born January 20, 1953, in Ogden, Utah to Don O. Olsen and Dallas Barnes. Tom was a proud Vietnam veteran serving his country from 1970 until 1972. He was always proud of his service yet rarely spoke of the conflicts he endured or the impact it had on his life. Tom worked at HAFB as a jet mechanic, a trade he learned in the Army. He was a talented mechanic and builder. When he fixed or built something you could rest assured it was perfect as he was the ultimate perfectionist. Tom loved the Dallas Cowboys and the Utah Jazz. He never missed an opportunity to watch each and every game. He also loved to ride his Harley Davidson, making the trip to Sturgis to participate in the yearly biker rally was a memory he truly cherished. We will forever remember him riding his bike, his long gray hair blowing freely in the wind. Tom loved to fish and hunt, spending countless hours trekking through the mountains and boating on the lakes across Utah, Idaho, and Wyoming. Tom married Carol Jorgensen on April 7, 1978. From that union, he had two children, Dallas E. Olsen, and Ivy K. Olsen. They divorced in 1993 yet remained close friends until his passing. Tom was a caring, loving, giving father, grandfather, brother and friend. He was honest and truthful. Although you might not have always agreed with his point of view, he wouldn’t back down once he believed he was right. He was stubborn; those that knew him best would never continue an argument because they knew it would not change his mind. He was preceded in death by his father Don O. Olsen; son Dallas E. Olsen; sister Diane Olsen; sister-in-law Bonnie Olsen; both sets of grandparents; and several aunts, uncles, and close friends. He is survived by his mother Dallas Olsen; daughter Ivy K. Olsen; stepson Brad Peterson; brother Dennis (Cheryl) Olsen; brother David Olsen; grandchildren Dayton Thomas Wilson, Celina Carol Olsen, Dallas Olsen, and Romeo Olsen; and several aunts, cousins, nieces, and nephews. Tom was a loyal friend, always supporting those he loved with words of encouragement. A special thank you is extended to Shasta for the love, companionship, and care she provided to Tom the past several years of his life. They had a special relationship that he cherished. A Viewing will be held Thursday, January 14, 2021, from 1:00-2:00 pm for friends. A Private Service for family will be held from 2:00-3:00 pm, followed by a military graveside dedication at Leavitt’s Mortuary and Aultorest Memorial Park, 836 36th Street, Ogden, Utah. To send flowers to Thomas' family, please visit our floral store.
To order memorial trees or send flowers to the family in memory of Thomas Olsen, please visit our flower store.