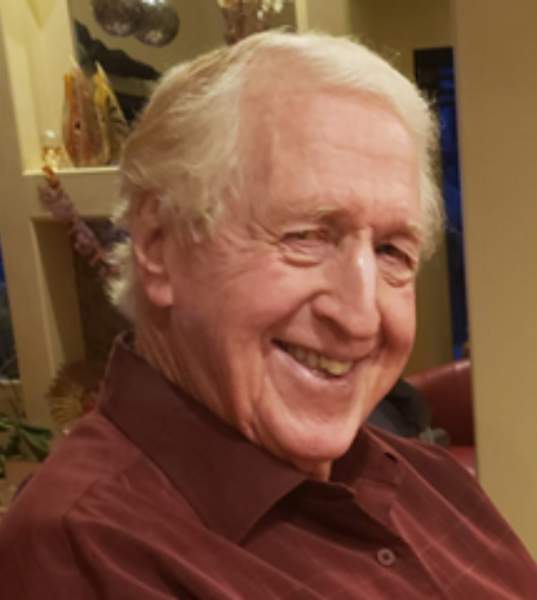 Epitaph On My Own Friend

An e’er God with image blest:

The friend of age, and guide of youth:

Few heads with knowledge so informed:

If there’s another world, he lives in bliss:

If there is none, he made the best of this.

A force of nature, John (Jack) William Howell (88) of Eden Utah answered a higher call to service without hesitancy or notice on June 7, 2022.  Born the second child of four to Robert and Katherine Howell in Los Angeles, California, he would be blessed with a bigger than life nature, filled with a fiery determination, a sense of adventure, humor, and good will to others. His work ethic and industry started early when he entered the grocery business at ten. With insatiable curiosity, love for life, art, and knowledge he developed architectural drafting skills and craftmanship that would build and bless his family and many others.

Jack’s sense of order and service saw him join the Los Angeles Police Department in 1960 where he solved many high-profile cases. Known for his positive attitude and conscientiousness, he retired as a Detective Sergeant with honors and merit. In 1982, he and his beautiful wife Jackie, having both retired from the LAPD, moved to Ogden Valley to be closer to family. Here they would see three of their children settle and grow their families. Surrounded by the beautiful mountains, abundant wildlife, and space for his green thumb, they would find the peaceful existence they both deserved.

It was his nature to serve, and his leadership abilities soon gave him the opportunity to volunteer with the Ogden Valley Translator District. He served in that capacity for twenty years. He would then serve on the Ogden Valley Planning Commission for an additional fifteen years until his death. He was honored and known for his dependability, his knowledgeable preparation, and dedication to the future of his beloved valley. He was literally heading to his online meeting at the time of his passing. We could feel him saying, “A funny thing happened to me on the way to the meeting.” He had great love and admiration for so many that he came to know and serve with.

Jack never met a stranger and was a man who whistled while he worked. He was comfortable in his own skin, clear about his priorities and purpose, and often outspoken in his opinion. He was infuriatingly right most of the time. Most of all he was a fiercely loving, passionately involved patriarch of his beloved family.

Jack and Jackie had an over fifty-year love affair. He adored her and she him. He told her daily how much and how blessed he was to be her husband. He made sure to always let each of us—from kids to great-grandchildren—know how beautiful and dear she and they were to him. He worked us hard and loved us hard. He taught his grandsons how to be good humans, good men, and good husbands and fathers. He always let the girls know they were beautiful and limitless. So many people have come forward to let us know the meaningful things he did for them, that helped them imagine their value as he saw it. He gifted us with the keys to happiness to life, which is gratitude for family, appreciation for purposeful hard work, and, most of all, persistent and consistent laughter.

He will be greeted by all the loved ones of his lifetime who preceded him in death, as well as of all the names he discovered for many generations through genealogy, which he treasured. Until we meet again, may we live as fully as you!

Graveside services will be held at Mountainview Cemetery in Eden, Utah on Tuesday, June 14 at 2:30 p.m. A celebration of life will be held following the service.

To send flowers to the family in memory of John (Jack) William Howell, please visit our flower store.